The exhibition The World Exists To Be Put on A Postcard has been running at the British Museum throughout the summer. It is an apt location for any exhibition of postcards—like the museum itself, these objects are deeply entwined with the colonial project. Sold alongside ‘living dioramas’ at worlds’ fairs, or purchased by European officials and their families in order to share a glimpse of the ‘exotic’ with family back home, picture postcards played a key role in circulating racist imaginaries and imperial ideologies throughout the early twentieth century (Hoskins 2007, Jain 2018). The ‘golden age’ of the picture postcard not only coincided with a fervent period of colonial expansion, it also fuelled and profited from it (Geary and Webb 1998).

Postcards retain significant presence within museum and gallery spaces, from the archives to the gift shop. Postcard collections are valued for the historical and personal insights they offer—in some cases via image, in others due to the written texts they carry.

Postcards sent by early anthropologists, for example, reveal perspectives that contrast with their self-consciously composed field notes—often casting their formal writing in a quite different light.

Postcards are also among the most popular items sold to museum visitors. Whether these commodities are kept, gifted or mailed by their buyers, they function to circulate collected and curated objects beyond the spaces that house them, subtly endorsing this increasingly contested act.

Postcards do other things too, of course. They have been recently touted as an accessible medium for buying art, for example via The Royal College of Art’s popular RCA Secret annual charity auction. They have been used in sociological projects—both academic and popular—as a means of offering real anonymity in crowd-sourced research in the digital age. PostSecret, for example, continues to yield books, travelling displays, and new additions to its digitized archive that boasts a huge international audience. Postcards double as posters and flyers for activists’ causes and events, documenting the history and contours of social justice movements. They are sold in tourist hotspots (and cold spots) the world over, often continuing to promote troubling imaginaries of exoticized people and places intertwined with mundane ‘wish you were here’ sentiment (cf. Robinson 2014, Kurtz 2017). Even as smart phone apps facilitate instantaneous transnational communication—of image, text and sound—postcards remain popular. They are pinned to walls and fridges, boxed away as keepsakes, wedged in stacks of mail.

I have been thinking a great deal about the potential uses and signifiers of picture postcards while co-curating a ‘global museum of equalities’ for the Global Gender and Cultures of Equality (GlobalGRACE) project. In GlobalGRACE, six teams in six different countries are using arts-based methods to research and respond to local issues relating to gender, wellbeing and cultures of equality. Each team comprises academics and NGO staff. The museum is one platform through which we will bring together our disparate research activities and findings and place them in conversation for a broad public audience. 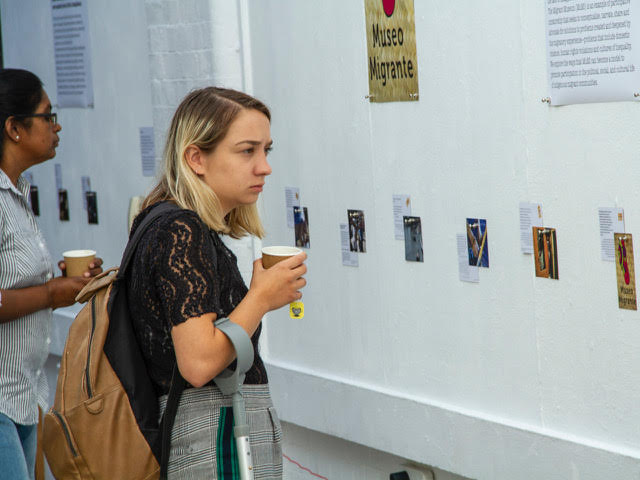 As both researchers and curators, my colleague Nirmal Puwar and I are as interested in exploring processes of communication and idea formation as we are concerned about securing objects for display. Postcards have become a central device in our work, offering opportunities for both. We remain mindful of their historical uses and impact, however, so that our experiments in producing and exchanging our own postcards might create pathways to subverting, not replicating, historical anthropological and colonial perspectives. These experiments engage questions of how researchers might differently visualize, articulate and share ideas about and from our field sites, in the dual context of conducting ‘anthropology at home’ and of asserting the value of transnational—particularly south-south—exchange within local and global academic communities.

We are using postcards for three core, overlapping purposes: as a research method, as a communication device and as exhibition objects.

Our first experiment with postcards took place as part of a small-scale exhibition entitled Exchanging Cultures of Equality, which marked the launch of the GlobalGRACE project in June 2018, at Goldsmiths University of London.

Two months ahead of the scheduled exhibition opening, we wrote to our as-yet unmet colleagues to request contributions for display. We asked each team to send us six images, each one accompanied by a short text of no more than 50 words, for us to make into postcards. We chose the device in order to render explicit that our ‘views from the field’ were partial glimpses, not definitive statements, marking only the beginning of a transnational conversation about our research sites and sensibilities.

The request posed productive and revealing challenges. Teams distributed responsibility for selecting images and texts in different ways. Some sets were chosen by consensus, intended to be coherent and complementary. Other sets were chosen by team members working independently, presenting distinct views on one topic. Ethical questions concerning attribution and informed consent arose as researchers and NGO workers assessed, from different perspectives, if and how pictures and words recorded in the field could now be put on display in London and online.

Particularly for teams that work with visual media, choosing just six images was felt to be too constraining. The word limit proved frustrating for all. Via email, our Brazilian colleagues reminded us of the importance of ‘challeng[ing] the hegemony and normalization of English as the dominant language’ in our presentation of text. This prompted important discussions regarding intended audience, and highlighted the tension between desires to be, or conversely to refuse to be, legible in an inescapably colonial context. 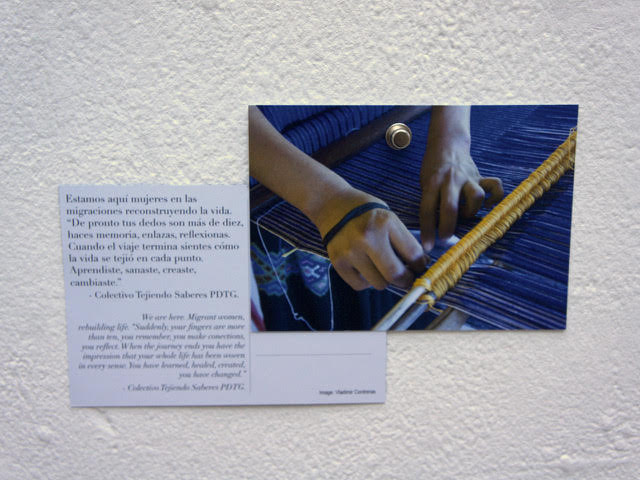 We decided to retain but visibly deemphasize English by displacing and shrinking translated text. Prioritizing and stylistically differentiating languages in this way served to highlight the multilingual nature of the GlobalGRACE project. It also gestured to the fraught, often demanding, processes of translation—between cultures as well as languages—that are both constant in, and central to, the project. Preparing the digital postcards for print required text be transformed into high-resolution image files, obliging multiple back-and-forth exchanges between colleagues as we proof-read across multiple alphabets, and against “font incompatibility” and other design software anomalies.

We regard this collaborative digital labour as a productive entanglement in wires crossed, much like time spent mining our respective languages for concepts and meanings that otherwise risk being lost in translation.

In the days before the exhibition launch, we invited team members to reflect on the postcard creation process and their thoughts on the display. We recorded these informal conversations and placed the resulting audio into landline phones that lined the exhibition walls—another communication device threatened by mobile technology. The phones allowed visitors (to the exhibition and to the online archive) to listen in, peeling back another layer of the curatorial process while emphasising the ongoing conversational nature of our project.

Visitors easily read the postcards as devices made, not physically sent through the mail. They were displayed with ‘front’ and ‘back’ impossibly side-by-side, with neatly printed, not handwritten, text. They remained unaddressed, pointing to a broad public as our intended audience. A project logo ‘stamp’ signified the conduit—not the destination—for the exchange. We used a different set of postcards to invite visitors, including GlobalGRACE team members, to continue the conversation underway by sharing their handwritten postcard replies. Such feedback loops make further visible the processes of exchange, debate, and reflection that too-often take place behind the scenes in anthropological, and other, exhibition spaces.

We continue to experiment as the GlobalGRACE project moves forward. We have invited team members to share informal, personal writing in the form of digital ‘postcards from the field’. Unlike ‘notes’—which for the anthropologist connotes structured if unorganized topical insights—postcards elicit expectations of conviviality, intimacy; the offer only of a partial glimpse. These digital postcards recognize and value features of research that are rarely shared publicly in academic or professional spaces, but that have proven deeply productive in forging intellectual as well as personal connections across our transnational research teams: doubts, hopes, flights of fancy, still-forming ideas, lessons learned along the way.

Looking ahead to the ‘global museum of equalities’ exhibition in Cape Town in 2021, we have invited project members to make and send postcards to their counterparts overseas. This experiment builds on our previous collaborative curatorial experience in a new context of deeper interpersonal and cross-project understanding, forged over two years of working together. These will be tailored by the sender for the recipient, and reliant on international mail services to arrive at their destination. Those that make it may be redacted, as the sender or recipient choose, within the exhibition. 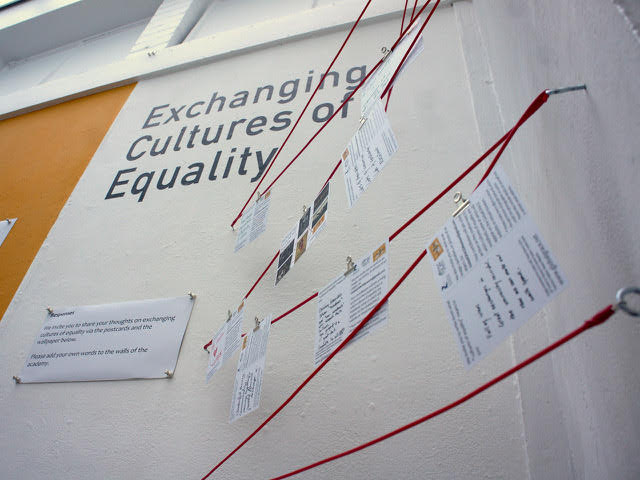 We are interested in the different choices that might be made by team members tasked with selecting, writing and mailing a bespoke postcard to a specific colleague across the world—a quite different proposition than digital files sent via email for potentially limitless duplication and public consumption. Project members—ourselves included—are currently working on their own postcards. Our ‘deadline’ for posting is still months away, but we are already anticipating new questions about processes of transnational academic exchange: What different material and tactile qualities would these made objects amass? How might the physical journey of the object changes its meaning, or rhetorical power? How differently might they be read, in the hands of recipients or on museum walls? How might the affective power of receiving (and of sending) such an object shape our professional, intellectually productive, relationships? Can such qualities be rendered understandable to exhibition audiences—or to project funders? If so, how?

This proposed experiment, and our use of postcards overall, has prompted important debates within and between project teams. Across the six GlobalGRACE research sites, popular postcards continue to promote a Western gaze that reproduces racialized and gendered visions of exotic others. Some colleagues have raised doubts that these framings are open to subversion; that the format can present ethnographic imagery otherwise. Others disagree, and have stressed the democratizing power of the postcard: a familiar form that presents an opportunity to ‘open up’ research process to broader audiences.

As we work with still and moving images across the project, we continue to grapple with the potential of echoing rather than challenging the colonial gaze of the picture postcard.

The National Geographic vision of ‘good’ imagery continues to shape popular ideas about the style and content of photographs presumed suitable for museum walls—despite, by that magazine’s own admission, its promotion of deeply racist frames (Goldberg 2018). In our projects, not least in mounting our own ‘museum’, we must embrace critical self-reflection and discussion in order to confront, rather than avoid, such influences.

We do not know where these experiments will lead us as yet, but we do expect to find some answers on a postcard.

Goldberg, Susan. “For Decades, Our Coverage Was Racist. To Rise Above Our Past, We Must Acknowledge It.” National Geographic. Special Issue, April 2018.

Hoskins, Janet. 2007. ‘Postcards from the Edge of Empire: Images and Messages from French Indochina.’ International Institute for Asian Studies Newsletter, 44: 16-17.