Music has always been a powerful political tool. While anti-war, anti-capitalist, and anti-fascist lyrics are perhaps most readily associated with folk (as the borrowed titles on this page suggest), they are equally potent in punk, hip-hop, trova, reggae—any genre, band, or song has the potential to promote social justice. Musicians’ actions —together with those of producers, promoters, labels and venues—can be as important as their words.

The legend of Victor Jara, singing “Venceremos” in the Chile Stadium in 1973 rather than cower in the shadow of his torturers, focused international attention on Pinochet’s fascist rule. While Miriam Makeba and Hugh Masekela wrote anti-apartheid songs in exile, high-profile Western musicians promoted the cultural and economic boycott of South Africa by refusing to play there during the 60s, 70s and 80s. Notable exceptions, from Frank Sinatra to Tina Turner, tacitly endorsed the ruling racist regime.

Brian Eno and Rodger Walters are leading proponents of the current cultural boycott of Israel, described by the BDS movement as ‘respect[ing] the Palestinian picket line by refusing to play Tel Aviv, and by declining participation in festivals or events that are sponsored by the Israeli government, complicit institutions or lobby groups.’ That stance that has drawn support (recently from Lourde, Gilberto Gil) and ire (Nick Cave, Thom Yorke) in equal measure. This month, Tel Aviv will host the Eurovision Song Contest under a cloud of protest. High-profile musicians—from classical composers to electro DJs—have called on the BBC not to screen the event, arguing: ‘Eurovision may be light entertainment, but it is not exempt from human rights considerations—and we cannot ignore Israel’s systematic violation of Palestinian human rights.’ Cher will not play Russia due to its anti-homosexuality laws, while countless US artists have boycotted Arizona because of its immigration policies.

Meanwhile, musicians from Bruce Springsteen to Chance the Rapper are rallying vocally against the excessive fees and scalping and price-gouging practices of online ticket vendors and ‘resale’ sites. The Sleaford Mods went further during a recent UK tour, selling £5 tickets to low earning fans at the door. It’s a small, important move in a British live music scene increasingly marked by commercialisation.

Glastonbury, back this year after a 2018 hiatus, may retain traces of the rebellious, utopian spirit central to its fame, but entry costs £253—and sell out in minutes to those able to wait, finger over computer mouse, at a designated time and date. While a portion of the ticket fee goes to charity, and despite 2017 crowds cheering Jeremy Corbyn on stage, the fact remains: most UK music festivals are for the few, not the many.

The same is increasingly true of Pride events across the UK (and around the world), where paid entry provides access to bars, plastic pop, and rainbow branding, but little in the way of politics—particularly remarkable for an event commemorating a riot. The articles that follow are a welcome reminder that independent, radical and revolutionary spirit continues to imbue some gigs and hits with urgent political power.

If I Had a Hammer

I first saw filmmaker Barbara Hammer (1939-2019) speak at a British Film Institute retrospective in 2010. Hearing her speak and watching her work, my ideas about film, art, and community were completely altered. Her ability to visualise joy, love, sexuality and friendship are unmatched. After her talk, Hammer was mobbed by a crowd of queer women eager to express similar thoughts. Her vision and voice will be missed beyond her chosen communities, but in this digital age it is never too late to seek them out—and inevitably be moved by them.

Red Pepper Issue 224 focuses on two of the most pressing issues of our time: climate emergency and the rise of the far-right. As the summer festival season gets underway, the culture section surveys a field of independent music projects, from co-op gig venues to anti-fascist and feminist music festivals, via insights from Lowkey. This column opened the section.

‘Asylum for Sale’ out now 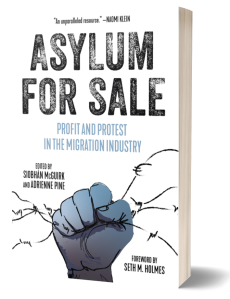