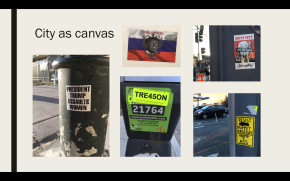 On June 3, 2018, I presented recent research at “Art, Materiality and Representation” a conference co-hosted by the RAI, SOAS, and the British Museum. I was invited to join the panel “Conflict and Activism“, and to discuss my research on how art-making practices have shaped social justice community spaces in Washington DC, alongside a group of fascinating academics and artist-practitioners. These self-reflective and theoretically innovative papers prompted me to think more deeply about concepts of “failure”, the long-term impact of arts programming “interventions”, sketching as research method, and community-created spaces as politically transformative.

Elsewhere, the conference was unusually stimulating, and benefitted from a tight thematic focus that still allowed for an impressive range of topics. Papers varied from highly theoretical, often metaphysical ruminations, to highly practical presentations. Talks about museums, or given by people working in the museum sector, dominated the latter category. Both were useful and informative, particularly in terms of my new role and research, but I was left a little weary to realise that the familiar, not very useful scholar/practitioner divide is not being broached within the field as swiftly or as often as I had hoped it might. The connections between the two were evident in the Programme, yet remained largely separated by empty corridors and closed doors during the conference itself. While museum workers seemed ready, on the whole, to grapple with politically charged questions of representation, voice, ownership, and so on, a number of the scholars I caught presented theoretically stimulating analyses that made no mention of the political or practical implications of their findings in these same areas, though they lingered under the surface. The conference was, overall, highly productive. I imagine particularly so for those who chose to open doors and cross the perceptible divide themselves, to consider our role as anthropologists in the production (and not merely the analyses) of “representation”.